Sport unifies powerfully. Hustle and effort are admired and revered. Cheating is abhorred. The rules apply the same to everyone. We don’t care where our teammates came from, what they believe, or what they stand for because we stand together. Jerseys make skin color invisible. We stand united against attack. We cheer. We applaud. We pick up the fallen. We encourage the mistaken. We all feel the sting of defeat.
END_OF_DOCUMENT_TOKEN_TO_BE_REPLACED

His case file looked like all the others in the storage facility for the DA’s Office in Dallas: a collection of a dozen or so dusty brown and white banker boxes. The difference? The name written on the outside: Jack Ruby. END_OF_DOCUMENT_TOKEN_TO_BE_REPLACED

“Sport has the power to change the world. It has the power to inspire. It has the power to unite people in a way that little else does. It speaks to youth in a language they understand. Sport can create hope where once there was only despair. It is more powerful than governance in breaking down racial barriers. It laughs in the face of all types of discrimination.” – Nelson Mandela

END_OF_DOCUMENT_TOKEN_TO_BE_REPLACED

He was tall, handsome, and raised in a religious house. As a youth he worked in his father’s grocery store. He was a star athlete at Farmersville high school in Denton, a Texas state record holder in the hurdles. He pledged Pi Kappa Alpha at UNT. And if he hadn’t hitchhiked down Sunset Blvd. in the summer of 1968, he might never have met Charlie Manson. His name is Charles “Tex” Watson, and 50 years ago today, he began a mission of murder called “Helter Skelter.”

END_OF_DOCUMENT_TOKEN_TO_BE_REPLACED

August 3rd began like most Saturdays do for me. I slept in a little, planned the day with my wife over coffee, and readied myself for some soon-to-be-played pickup basketball with a prayer not to get injured and a preemptive Advil. First, though, I had to get the groceries for the week. I made it to my local Wal-Mart at about 10:30. Saturday errands like that are woven into the fabric of our lives. I don’t know the exact number of folks who did the same as me, but I bet it was just about everyone we know.

END_OF_DOCUMENT_TOKEN_TO_BE_REPLACED

Tedx is coming to Frisco! What is a Ted Event? It’s a series of Ted talks addressing a variety of topics seeking to build consensus and outside-the-box thinking. 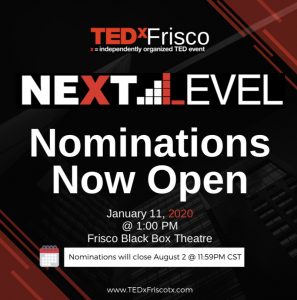 It is not a sales pitch, marketing conference or political gathering. The talks are concise – no more than 18 minutes, and are given by diverse speakers across several disciplines.

Which topics? That depends on YOU. You can nominate anyone – including yourself. The sky is the limit. Click Here and Submit your topic today! If you have any questions, e-mail tedtalkfrisco@gmail.com.

An Open Letter to the 2021 Texas Legislature

I watched the 2019 legislature with great hope, convinced that the bipartisan call for meaningful bail reform in Texas would finally be answered. Ultimately, however, it was not. As such, I offer this open letter to 2021 lawmakers addressing why we need bail reform, and how to do it.

END_OF_DOCUMENT_TOKEN_TO_BE_REPLACED

The text of our Declaration of Independence in full. Some of the most powerful words ever written. Happy Independence Day.

The unanimous Declaration of the thirteen united States of America, When in the Course of human events, it becomes necessary for one people to dissolve the political bands which have connected them with another, and to assume among the powers of the earth, the separate and equal station to which the Laws of Nature and of Nature’s God entitle them, a decent respect to the opinions of mankind requires that they should declare the causes which impel them to the separation.

END_OF_DOCUMENT_TOKEN_TO_BE_REPLACED

James Scandirito Senior, 74, was reported missing on April 1st, 2018. His son, James Scandirito Junior, said that he last saw his father the previous night. It turns out that Junior actually dismembered his father and hid his body. Was it murder or panic? END_OF_DOCUMENT_TOKEN_TO_BE_REPLACED

In South Carolina, Timothy Jones Jr. was  convicted and sentenced to death for murdering his 5 children, ranging in age from 1 to 8. He plead not guilty by reason of insanity. Let’s discuss this case and the insanity defense in Texas. END_OF_DOCUMENT_TOKEN_TO_BE_REPLACED